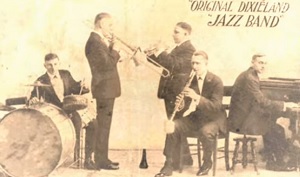 Original Dixieland Jazz Band
Trad Jazz had a revival after the Swing and Beebop era of the 1940's, although it is said to span the 1930's through the 1950's in the U.S. and Europe.

The New Orleans style of Trad Jazz had its resurgence with tuba providing a strong base note and a marching band style. A trumpet played the melody while other instruments improvised together and in solos. 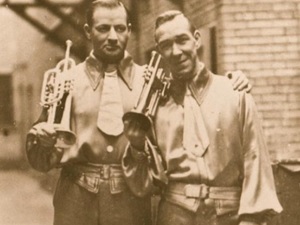 Muggsy Spanier
The Chicago resurgence replaced the tuba with a string bass plus other stringed instruments like banjo and guitar, in a strong, fast-paced, two-beat rhythm with improvisational solos.

English Jazz pianist Margaret Marian Turner McPartland was a noted figure in the U.K., Chicago and New York Jazz scene, eventually hosting the popular Piano Jazz program on NPR where she played and interviewed notables from Jazz history and contemporary Jazz. (Jimmy McPartland was her husband, whom she met in 1946 while performing for the troops in Belgium.) You can hear some of her music on Youtube. 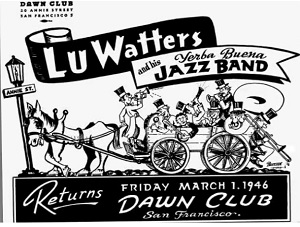 The West Coast revival began in the 1930's with Lu Watters and his Yerba Buena Jazz Band, who played at the Dawn Club in San Francisco. (Turk Murphy was an early member of the YBJB before starting his own band.) Lu opened a restaurant called Hambone Kelly's in 1947 on San Pablo Avenue, which was called "Music Row" due to the number of dance halls and music clubs on that street between Oakland and El Cerrito. Watters' band performed at his restaurant until they dispersed in 1950.

West Coast bands typically used both banjo and tuba, plus brass horns and a washboard, with improvisation and solos blasting two-to-the-bar tempos. 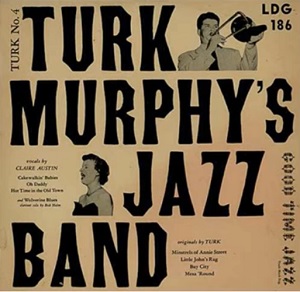 Around the same time, a Trad Jazz revival took place in the Low Countries (coastal areas) of The Netherlands, Belgium and Luxembourg, notably with the Dutch Swing College Band, who focused on Ragtime and New Orleans-Style Trad Jazz. These bands are larger than most Trad Jazz bands with as many as fifteen musicians, among the largest bands playing Trad Jazz today.

Bix Beiderbecke and his Band

Traditional Jazz publications:
The term "Dixieland" is not used by many contemporary Trad Jazz musicians due to its association with racist Jim Crow laws in the South. "Trad Jazz" is the preferred term.

Enjoy some music from YouTube by clicking on names in this partial list of Trad Jazz greats.