Remembering Internment in the Bay Area

Last May marked the 70th anniversary of one of the more troubling periods of our local history.

The U.S. Army Civilian Exclusion Order No. 96, on May 24th and , required all Santa Clara County citizens in (West Coast) Military Area #1 of Japanese ancestry to report to the Civil Control Station Assembly Area, also known as the Men's Gymnasium, San Jose State College, located at 4th and San Carlos Streets in .

The exclusion order appeared on May 23, 1942, from the Presidio of San Francisco, following similar public proclamations made on March 2, 1942.

U.S. General John L. DeWitt created two military zones on the West Coast and required Japanese living in those zones to report all changes in residence within five days.

There were some U.S. government films made to justify these actions in 1943, all written and produced by the Office of War Information, Bureau of Motion Pictures.

All of the proclamations resulted from 's Executive Order #9066, published on , ordering the evacuation to inland resettlement areas of all West Coast residents perceived as a threat to national security.

Documents and photographs online:
All of these documents can be read online at the National Archives Records of the War Relocation Authority (WRA). The FBI Vault also has historic Custodial Detention documents online, which show records, memos, and other documents on the arrest of persons by nationality and geographic location, starting as early as 1939. Italian Americans, German Americans, and other Americans of certain European nationalities were tracked as well.

The Online Archive of California has a profound group of photographs illustrating the bleak conditions of the Japanese in federal relocation camps during this era, some of which are available online.


Other counties in California posted similar exclusion orders as the army prepared to move and house thousands of Japanese residents and nationals, believing some were spies or in league with submariners off the California, Oregon, and Washington coasts. A sentiment of national suspicion by some towards the Japanese had been heightened after Pearl Harbor was bombed on December 7, 1941, which lead the U.S. Congress to declare war on Japan the following day.


To comply with relocation orders, Japanese residents lost their jobs, their homes, and their businesses, reclaiming only pennies on the dollar, if anything, for houses, cars, and possessions, in order to evacuate to Federal assembly centers by the mandated deadlines.

Japanese families were held in these assembly areas (like the Men's Gym at San Jose State College) under extraordinarily poor and crowded conditions, before being placed on crowded buses and trains to one of two WRA Relocation Centers on the West Coast, Manzanar or Tule Lake, with a third Isolation Center for those who were perceived to be at more high risk to national security, located near Manzanar.

Along the Peninsula, Japanese families assembled and were housed in horse stalls at Tanforan Race Track, although some of the stalls had not been fully cleaned out. In some cases there were no doors on the latrines or restrooms, and women who were considered high risk had to change clothing in front of male guards, to make sure nothing was being hidden. On the train and bus journeys from the local assembly centers to the final California resettlement camps, women and men sometimes had to use open fields with family members holding up blankets and coats for privacy, as there were no restrooms at stops. Evacuees and conditions at Tanforan were photographed by Dorothea Lange for the WRA in 1942.

Survivors tell their stories Online:
There are some local accounts of Internment experiences online, including some accounts by well-known celebrities living South of the Bay Area at the time of evacuation.

Materials on the Japanese American Relocation and Internment can be found online at WorldCat:

Reflections:
Legislated discrimination against one group of people, for whatever reason, diminishes every other ethnic, gender-based and socioeconomic group, as the legislation itself places a government stamp of approval on laws and policies which codify prejudice as an appropriate act, in forming public policy for diverse groups of residents.

If it is acceptable for some not to have full constitutional rights, for whatever reason, then none really have a guarantee of full rights, either now or in the future, no matter what their race, gender, education, status, or ethnicity may be. By codifying separate constitutional rights among groups found within a nation, all residents become vulnerable as potential targets of the next legislative group to come along, who may very well believe that those who are safe today, are tomorrow's new enemies.

There are certain benefits to growing up in a 1950's agricultural wonderland, like exploring a backyard oasis filled with bugs, birds, and critters, as well as an odd collection of home grown fruits and vegetables. In my youth this was capped off with the annual crop of alien-sized, monster Zucchini, which rivaled anything found in Roswell.

Please raise your hand if you are over fifty and ate part of at least one overgrown, stuffed zucchini for weekly dinners during the summer months? Yep, I knew it. The parents always made it seem as if we were getting a delicacy. Right. Raise your hand if your family tried to give away old zucchini from their gardens hidden under tender, sweeter, and smaller squash? Yep, you are one of us.

There were beautiful butterflies and large, furry moths in this valley, along with amazing caterpillars, grasshoppers, huge bees, and assorted beetles. Much of the "old" West Valley flora and fauna can be seen at McClellan Ranch Preserve, which is worth a quiet afternoon of exploration.
When my fifth grade teacher told us to place an ammonia-dipped cotton ball in a sealed jar and catch and kill bugs for a homework assignment, my dear mother sent that teacher a note the next day stating, "We don't kill living things that aren't bothering us at our house." Right on, Mom. 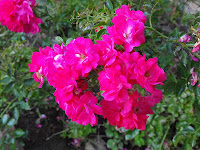 This love of living things, and a few years of watching gardening shows on KQED, led to a kind of rescue mentality in my life. Dying house plant, small tree, bush, or veggie plant for sale? They all came home with me. I had a Mammillaria Lanata "nipple" cactus which I bought for $.49 at the local market because it was completely dehydrated and about to roll out of its miserable pot. I had that cactus for 36 years until my house-sitting friend left it outside during a freeze, when I was out of town. By that time it weighed about 15 lbs and had rings of bright pink flowers every summer. Rest in peace, my friend.

I have included photos of some of my "rescue" plants here. A saved Hydrangea from the large, local home improvement center, was planted last summer. A salvaged Pink Supreme Rose was purchased from an unnamed nursery, where it was left with no water and in sad shape. My biggest victory, however, is a rescued Early Elberta peach, which had lost all of its leaves and was literally gasping (at least in my mind), when I saw it the local home improvement store last fall. It came home with me and was planted, fertilized, and loved. Here is my wonderful peach tree today: 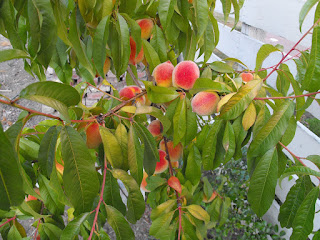 I have also inherited an old nectarine tree which looks like it's dying every winter. If you've seen Snow White and the Huntsman, you might remember the barren, gnarled trees in the evil forest. Well, my old nectarine tree looks like a distant relation to Snow's worst arboreal nightmare. So, I thought, I'm going to give that old tree some love (and some fruit spikes.) Here is my old friend in all of her fruit-laden, summer glory today: 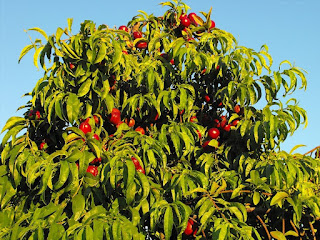 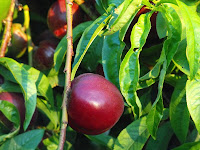 And the fruit is large, beautiful, and healthy, so much so that I had to thin out the young buds this spring, yet still have such a large crop that I lost some branches due to the sheer weight of all of the fruit.

For fruit trees which produce abundant fruit, call Village Harvest, a nonprofit volunteer organization which organizes teams to pick fruit and distribute it to the hungry, through several county organizations and food banks.

My newest garden residents are a Bearss Seedless Lime and an Improved Meyer Lemon, both rescued from a local hardware/nursery store and ready for some TLC. I will post pictures as they recover.

If you are interested in learning more about heirloom fruit, vines, roses, and any type of gardening, try some of these local and regional resources:
There are lots of great books on gardening at your library, which can be found using WorldCat, which collects every library book, audio recording, thesis, map, etc., all in one large database online. Here are just a few suggestions from that database. Try your own search to find more books, articles, and e-books on WorldCat.
Happy Gardening! (And happy reading!)

(Update: Sadly, all of my fruit trees all had to come out, due to vector control issues in my area. Evidently I was too successful and I was getting too many critters. I miss my trees. At least they were well loved while I had them.)