They called those who served in WWII The Greatest Generation, hailed the return of soldiers with parades and The Servicemen's Readjustment Act of 1944, also known as the GI Bill, then built memorials and awarded medals, producing inspiring Hollywood movies about U.S. soldiers’ courage under fire.

Unfortunately, some who served and lost their lives during WWII were not recognized, assisted, awarded honors nor provided with GI benefits and military burials, for decades. Some disappeared to new hometowns after the war where little was known about their service. Among those unsung heroes were the Women Airforce Service Pilots (WASP) and some of them lived here in our Valley. 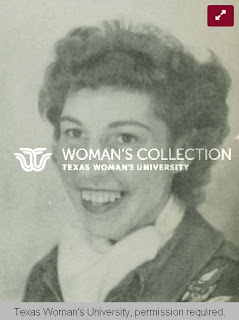 If you dined at The Brave Bull in San Jose many years ago and were served by a straight-talking, tough as nails, almost 6-foot tall waitress named Marge, or took flying lessons from a by-the-book middle-aged woman of the same name at Reid Hill-View Airport (when Amelia Reid was in charge of the aviation school there), you most likely met former WASP, Marge Frenzel.

According to Robin Reid, Amelia Reid's son, Frenzel was very tough on her student pilots, sitting behind them in the cockpit and telling them to “sit up straight” during lessons, believing their lives depended on comportment which proved they were really paying attention.

Frenzel, born in 1920 as “Anna Logan”, grew up in a small town in Kansas. She worked as an office assistant for a couple who owned a small airport in South Dakota, where she learned to fly during her first aviation job.

Anna Logan, AKA: Marge Frenzel (above) was trained as a WASP in Sweetwater, Texas, WASP Class 44-1. After the war she moved to San Jose, California.

While in Sweetwater, Logan became friends with fellow WASP Marge Hurlburt, with whom she would later design the Hurlburt Hurricane NX 1223 along with another fellow WASP and co-designer, Duke Caldwell. Their aircraft was also known as the Camburn Special, a midget plane designed for air racing.

I was told that Logan/Frenzel flew a North American T-6 (vintage aircraft racing was popular) and had to do a forced landing, telling others that her plane had been sabotaged. Competition was very fierce, so some women slept in the hangar with their planes to prevent tampering.

Frenzel once stated (according to Robin Reid) that as a WASP ferrying planes, “You just figured it out; men (at the factories and bases) did not help us or tell us how to start the planes.”

This seems to be consistent with what I have read online about the hostility which some WASP met at factories and bases among men who felt that women should not be in service as pilots, taking jobs from men. As you will read below, others felt that engaging women pilots to perform routine aircraft transport work, allowed men to serve in other more vital capacities during the war.

She and Amelia Reid were never close according to Robin Reid; he states that they repeatedly argued about the layout and tidiness of the Reid Hill-View aviation school office. However, since both women were raised in small towns during the depression, they bonded as divorced women raising children alone.
According to Robin Reid, Amelia Reid co-signed on a real estate contract to help Frenzel purchase a home in East San Jose, so Frenzel would have a safe place to raise her three sons; Cal, Glenn and Steve. As Robin Reid said about his mother, "You just did those kind of things to help people, in those days."

The Chicago Tribune has a wonderful article about Amelia Reid (1924-2001) and her son, commercial pilot Robin Reid, including their history, backgrounds and flying achievements, at:
https://www.chicagotribune.com/news/ct-xpm-1993-02-12-9303181838-story.html

Frenzel was mentioned briefly in newsletters posted online by The Ninety-Nines’s, a women’s pilot association with chapters around the United States. Frenzel received a CrystalEagle award (see image above) from the Northern California Aero Club, during a program held at Hiller Aviation Museum. Frenzel passed away in 2005; her family still owns some of her planes.

It was very difficult to locate information about Frenzel in WASP source material, so I am indebted to those who knew her* for their contributions to this article. Many thanks to Robin Reid, who was kind enough to call me with information about his mother and Anna Logan/Marge Frenzel.

The Wings of History Aviation Museum in San Martin has undoubtedly the best display on the history of women in aviation, found anywhere. Congratulations to their docents and volunteers who spent many hours reproducing photos and adding factual text to the display at their site, for their efforts to remember and honor women pilots, many of whom broke records for speed, altitude and endurance.

Eleanor Thompson Wortz (below) also trained as a WASP in Sweetwater Texas, Class 43-4, just before Logan Frenzel. After the war she had an international career as a linguist and eventually moved to Los Altos with her husband. She worked for a brief time at Moffett Field in Mountain View, before becoming an educator. 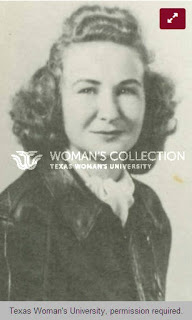 If you attended the Los Altos United Methodist Church, took Business courses at the College of San Mateo, or had a swim at the Woodland Vista Swim and Racket Club in Los Altos, you most likely met Eleanor Thompson Wortz (left), who wrote an autobiography about her life and aviation experiences as a WASP, entitled: Fly Gals of World War II: Women Airforce Service Pilots (WASP). **

Like Logan/Frenzel, Eleanor Wortz is found in the Women Airforce Service Pilot Digital Archive, within the Woman’s Collection online at Texas Woman’s University, with selected biographies, photos and basic data about the WASP program:
https://twudigital.contentdm.oclc.org/digital/collection/p214coll2
Wortz's obituary is found at:
https://waspfinalflight.blogspot.com/2013/10/eleanor-thompson-wortz-43-4-aug-18-201.html 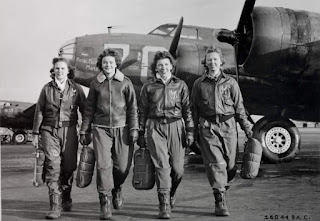 Likewise, the Aero Club of Northern California has honored former WASP for their achievements: https://www.aeroclubnocal.org/

A Northern California Wasp group at one time held annual reunions and posted that information online, yet, as the few remaining local WASP decrease in numbers, sometimes little is known or easily discovered about their lives and roles in the WASP program, if their biographical information has not been published or digitized by those archiving WASP history. TWU (Texas Woman's University) has digitized the publication, WASP NEWS.


History of the WASP

On September 10, 1942, Nancy Harkness Love, under the aegis of the U.S. Air Transport Command, gathered 25 rigidly screened women pilots to create the Women’s Air Ferrying Squadron (WAFS), operating out of New Castle Army Base in Delaware, Maryland. Only 40 women met the qualifications needed to serve. When they were accepted into the program, they had to purchase their own uniforms to ferry planes from aviation factories to military bases. https://www.army.mil/women/history/pilots.html

Similarly, Jackie Cochran, who learned to fly in 1932 while working as a cosmetics salesperson and later won international aviation races, also achieved the first blind instrument landing by a female pilot and set records for altitude and airspeed. She became the first woman to fly a bomber to England during WWII.
https://www.eisenhowerlibrary.gov/research/online-documents/jacqueline-cochran-and-womens-airforce-service-pilots-wasps 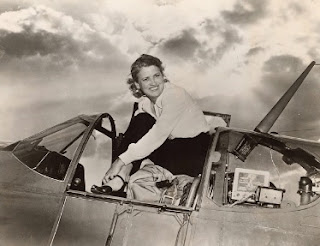 By 1939 Cochran believed that U.S. women could serve in the same manner as women pilots in the UK. She proposed a similar program to Eleanor Roosevelt, however, General Henry “Hap” Arnold rejected her proposal. Not to be dissuaded, Cochran recruited 25 women pilots from the U.S. to train and serve in the war effort overseas by ferrying military aircraft for England, and in her words, to “free a man to fight”.

It has been said that on her return from England in 1943, Cochran was irate to learn that Nancy Harkness Love had been given permission to train women pilots to serve in the WAFS. Cochran lobbied the military heavily to adopt her original proposal, which included military classes, training and duties for women pilots far beyond just ferrying new military planes to bases.

Eventually, due to Cochran’s perseverance, the WAFS were absorbed into a new service called the Women Airforce Service Pilots (WASP) under her leadership.
https://www.army.mil/women/history/pilots.html

Although women who flew sometimes died and were injured during their WASP service, the WASP did not gain full military status until 1977, thanks to Public Law 95-202, Section 401 (PDF), signed by President Jimmy Carter. The new law granted WASP retroactive veteran status. By 1984 WASP were finally awarded WWII Victory Medals. Those who had served one year received the American Theater Campaign Medal. In 2010, WASP were awarded the Congressional Gold Medal (see image below).
https://www.npr.org/templates/story/story.php?storyId=124533914 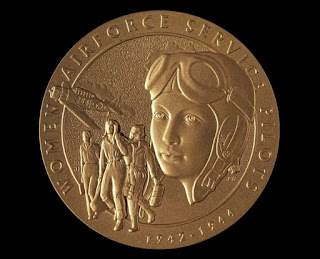 An excellent slide show, timelines and interviews of then-living WASP may be found on the NPR Web site at: https://www.npr.org/templates/story/story.php?storyId=123773525 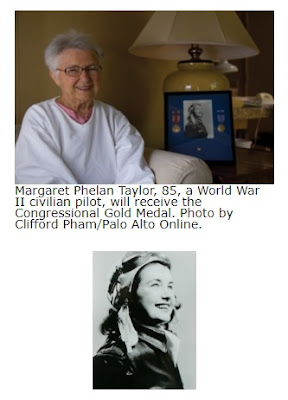 The NPR WASP timeline features accounts by WASP Margaret Phelan Taylor (images at left) of Palo Alto, as well as the tragic story of Mabel Rawlinson (see images below) who died at age 26 in 1943, when she may have been  hit by friendly fire while towing a practice target for inexperienced aircraft anti-artillery gunner students.

Some believe Rawlinson's aircraft fuel was sabotaged with sugar by “angry male pilots who resented the females taking over their stateside jobs”, and that the sabotage was covered up by the military. This prompted Jackie Cochran to fly to the site of Rawlinson's crash to conduct her own investigation, where she determined that sugar in the fuel line and a stuck hatch was the cause of the crash.

Rawlinson’s story is told by her niece (unnamed) at: http://www.everydaycitizen.com/2008/05/still_my_fallen_hero_fly_girl.html

Read Margaret Phelan Taylor's story on Palo Alto Online. Images of Taylor (above) are from that publication. Here is the direct link to the article about Taylor and Rawlinson, plus Taylor's comments about conditions for WASP in service and lack of military funds for burials, etc., from that publication:
https://www.paloaltoonline.com/news/2009/07/06/palo-altan-to-receive-congressional-gold-medal

This article is dedicated to WASP and the memory of Mabel Rawlinson.
Images of her are below, taken from her obituary,
written by her niece Pam Pohly, at:
http://wingsacrossamerica.us/web/obits/rawlinsom_mabel.htm

To WASP who served without recognition for so many years;
Thank you for your service. 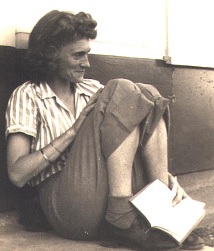 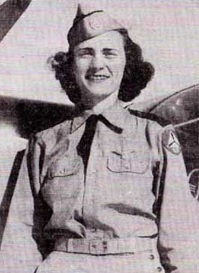 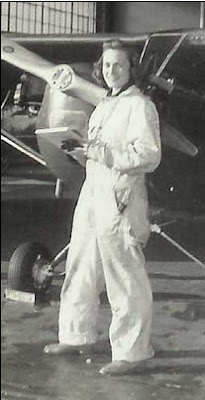 Sources not listed above:

*Many thanks to Mary Hanel, Santa Clara City Library Genealogy and Local History Librarian (retired) for information about Eleanor Thompson Wortz, to Robin Reid, to Jen Watson of Aerodynamic Aviation and to all of the docents at the Wings of History Aviation Museum in San Martin, California, for their assistance and willingness to answer perhaps far too many questions about WASP in Santa Clara County.  ---C. Alexander.

Enter your location on WorldCat to find her book at your local library: https://www.worldcat.org/title/fly-gals-of-world-war-ii-women-airforce-service-pilots-wasp/oclc/785831774&referer=brief_results