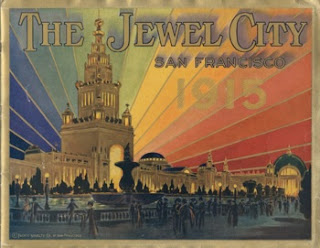 We are fortunate to have a wealth of Web sites with images, history, and original source research about the PPIE of 1915 in San Francsico's Presidio.

Since joining the San Francisco Bay Area Post Card Club and hearing a slide-talk on the PPIE of 1915 with historic post cards, gems, and ephemera from the actual exposition, I have been hooked on the 1915 PPIE and it's history. This fair was significantly important to the growth of our local culture and commerce, and it was also a world-wide event with international impact.

The Exposition was economically noteworthy since it told the world that San Francisco and the Bay Area had recovered from the catastrophic earthquake and fire of 1906. Pre-earthquake, San Francisco and the Bay Area had been thriving centers of tourism, shipping, and commerce. Post-1906, many potential residents, visitors and businesses became afraid to tour, invest, or live in the Bay Area. The PPIE of 1915 marked an end to those concerns on a world-wide scale.

Santa Clara Valley had an exposition hall at the fair which highlighted the agricultural and mechanical innovations in this valley. In 1915 the Valley of Heart's Delight was considered to be the epicenter of agricultural innovation and a world-wide leader in new canning and fruit-drying practices, as well as machinery technology. 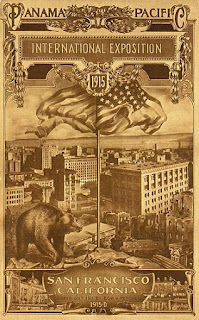 Likewise, area winemakers also had an exhibition hall at the PPIE, with wine competitions taking place on a global scale. Many Santa Clara Valley winemakers won top honors internationally for their champagne, wines, brandies, and other spirits.

I have divided PPIE of 1915 resources below in two sections. One section is for Santa Clara Valley history and the PPIE of 1915. The second section is for general PPIE information and history, all from sources I feel are fairly reliable on the Web. This page will be updated with new resources as they are located, as the subject is one of my passions.

Santa Clara Valley and the PPIE of 1915: 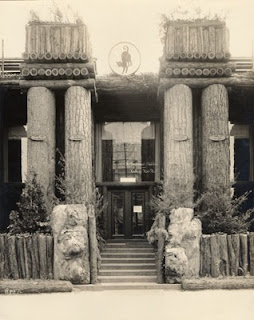