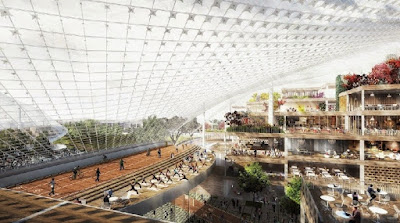 The Association of Bay Area Goverments or ABAG, assists local cities here in meeting state requirements to develop a Housing Element (HE) within their General Plans (GP) and General Plan Amendments (GPA). The Housing Element must demonstrate how each Bay Area city will plan and permit construction to provide new housing at all price points, particularly in proportion to the expanding business properties within their borders.

The Housing Element portion of each GP or GPA is driven by the most recent RHNA, or Regional Housing Need Allocation, which sets goals for future housing needs in our Bay Area region. Each city in our region is required to meet their assigned target for a portion of the RHNA by permitting affordable housing within their city. This is accomplished by revising the Housing Element within their General Plan or by creating a General Plan Amendment. Typically RHNA goals are set for a period of eight years. All city Housing Elements are due to the state by January 15th, before the next RHNA cycle begins.

Here is what ABAG states about RHNA on their Web site:


State law recognizes the vital role local governments play in the supply and affordability of housing. Each local government in California is required to adopt a Housing Element as part of its General Plan that shows how the community plans to meet the existing and projected housing needs of people at all income levels.

The Regional Housing Need Allocation (RHNA) is the state-mandated process to identify the total number of housing units (by affordability level) that each jurisdiction must accommodate in its Housing Element. As part of this process, the California Department of Housing and Community Development (HCD) identifies the total housing need for the San Francisco Bay Area for an eight-year period (in this cycle, from 2014 to 2022). ABAG and MTC must then develop a methodology to distribute this need to local governments in a manner that is consistent with the development pattern included in the Sustainable Communities Strategy (SCS). Once a local government has received its final RHNA, it must revise its Housing Element to show how it plans to accommodate its portion of the region's housing need. 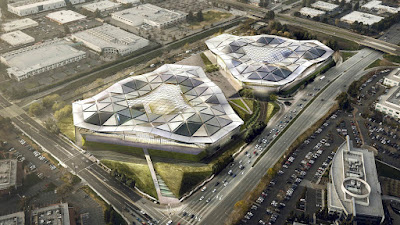 The projected expansion of existing businesses or the addition of new businesses, requires each city to amend their existing General Plan Housing Element to redefine parameters and requirements for new growth, plus modify their Housing Element in proportion to business growth.

A General Plan Amendment (GPA) usually includes newly-restated planning goals for a specified time frame. Goals include limits on building heights, amended requirements for defined setbacks (the space between the roadway and the structure, including any landscaping requirements), the allowed density (units per acre), the percentage of low-income housing and senior housing in new developments, plans for expanded transportation, pedestrian areas and bike lanes, the modification of freeway access points, plus other details requested by City planners, City Council members and residents, who typically are involved for a year or more in a General Plan Amendment and Housing Element conceptual process.

The State of California Governor's Office of Planning and Research provides General Plan Amendment Guidelines with suggestions for resident engagement and other topics, at:
http://www.opr.ca.gov/planning/general-plan/guidelines.html

In past years the GPA and RHNA process seemed perplexing to residents, since ABAG set a RHNA for each city to achieve state-projected housing requirements at all price levels, yet affordable housing did not seem to materialize according to the local RHNA plan, in some cases. Planned senior housing became market-rate condos, planned affordable-rate condos became luxury apartments, etc. That conundrum was eliminated on September 29, 2017, when Governor Brown signed SB-35 Planning and zoning: affordable housing: streamlined approval process.

SB-35 requires that cities (and counties) make written reports to the State Office of Planning and Research, and the Department of Housing and Community Development, by April first of each year. In the reports, cities must demonstrate their progress in meeting their RHNA and GP/GPA Housing Element goals, or they will be cited:


(b) If a court finds, upon a motion to that effect, that a city, county, or city and county failed to submit, within 60 days of the deadline established in this section, the housing element portion of the report required pursuant to subparagraph (B) of paragraph (2) of subdivision (a) that substantially complies with the requirements of this section, the court shall issue an order or judgment compelling compliance with this section within 60 days. If the city, county, or city and county fails to comply with the court’s order within 60 days, the plaintiff or petitioner may move for sanctions, and the court may, upon that motion, grant appropriate sanctions. The court shall retain jurisdiction to ensure that its order or judgment is carried out. If the court determines that its order or judgment is not carried out within 60 days, the court may issue further orders as provided by law to ensure that the purposes and policies of this section are fulfilled. This subdivision applies to proceedings initiated on or after the first day of October following the adoption of forms and definitions by the Department of Housing and Community Development pursuant to paragraph (2) of subdivision (a), but no sooner than six months following that adoption.

Section 65400 of the Government Code is amended to read:

65400.
(1) Investigate and make recommendations to the legislative body regarding reasonable and practical means for implementing the general plan or element of the general plan, so that it will serve as an effective guide for orderly growth and development, preservation and conservation of open-space land and natural resources, and the efficient expenditure of public funds relating to the subjects addressed in the general plan.
(2) Provide by April 1 of each year an annual report to the legislative body, the Office of Planning and Research, and the Department of Housing and Community Development that includes all of the following:
(A) The status of the plan and progress in its implementation.
(B) The progress in meeting its share of regional housing needs determined pursuant to Section 65584 and local efforts to remove governmental constraints to the maintenance, improvement, and development of housing pursuant to paragraph (3) of subdivision (c) of Section 65583.
The housing element portion of the annual report, as required by this paragraph, shall be prepared through the use of standards, forms, and definitions adopted by the Department of Housing and Community Development. The department may review, adopt, amend, and repeal the standards, forms, or definitions, to implement this article. Any standards, forms, or definitions adopted to implement this article shall not be subject to Chapter 3.5 (commencing with Section 11340) of Part 1 of Division 3 of Title 2. Before and after adoption of the forms, the housing element portion of the annual report shall include a section that describes the actions taken by the local government towards completion of the programs and status of the local government’s compliance with the deadlines in its housing element. That report shall be considered at an annual public meeting before the legislative body where members of the public shall be allowed to provide oral testimony and written comments.
The report may include the number of units that have been substantially rehabilitated, converted from non-affordable to affordable by acquisition, and preserved consistent with the standards set forth in paragraph (2) of subdivision (c) of Section 65583.1. The report shall document how the units meet the standards set forth in that subdivision. 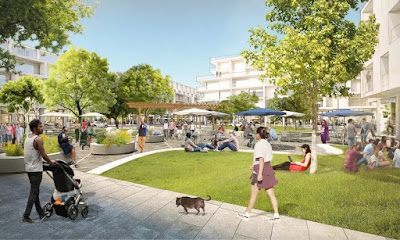 New construction is a hot button topic in Silicon Valley, often pitting neighbors against neighbors and sometimes leading to long, intense public hearings, as residents fight to protect heritage neighborhoods from high density, mixed-use sites near their homes and schools. (Mixed use = retail, office and housing in one development.)  Residents have watched as once-adequate parking lots have been eliminated and replaced by new structures, causing customers to park in front of residential homes nearby. Some residents now shop and dine in other cities where parking is still adequate, providing easier access for families and seniors. Local businesses seem to be hurt by over-development of sites, which leaves few parking spaces for customers.

Many new, mixed-use developments employ what Silicon Valley residents refer to as, "the Santana Row model," where shared-wall, two to three-story, Victorian-style retail and restaurant buildings, open to a central, landscaped lane with sidewalks, mini-parks, sidewalk cafes and bars. In this model, the retail facades hide adjacent high-density condos and apartments, which are part of the development.

The Santana Row model is meant to replicate the popular charm of downtown Los Gatos, a City which preserved its heritage buildings and parks, becoming a popular evening and weekend destination for diners, strollers and shoppers.

Santana Row feels like an old-fashioned town square in Europe, where people wear their best clothes to stroll the central, tree-shaded lane between high-end merchants like Tesla, Gucci and Kate Spade after a meal, a glass of wine or while window shopping. A burger may cost $20 due to the high cost to merchants in maintaining this contrived ambiance, yet residents seem to love the experience, despite the increasing lack of nearby parking and very dark paths to existing parking areas, some across a six-lane street just a few blocks from a major freeway entrance. 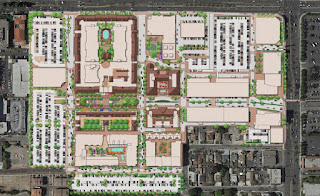 The social platform, NextDoor, which is used by many Silicon Valley cities and local agencies for targeted dissemination of community information, has long been a mine field of local development controversy, easily rivaling the political divisiveness seen elsewhere in the nation both in tone and in harsh responses to neighbors with differing points of view on development issues. Several anti-development groups are very active in Santa Clara, Cupertino and Palo Alto Nextdoor neighborhoods, with some members serving as Nextdoor Leads, steering comments to oppose or promote local growth. Nextdoor recognizes that its platform may be a player in the 2018 election cycle due to SV's dynamic and engaged population, particularly in San Jose. 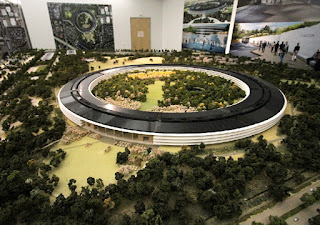 Probably the most interesting and inclusive perspective on the state of Silicon Valley housing is provided by Joint Venture Silicon Valley, a group which seeks to set "a neutral forum for collaborative regional thinking and leadership from both the public and private sectors."

Joint Venture Silicon Valley holds a State of the Valley Conference each February highlighting the status of local industry, innovation, entrepreneurship, housing and transportation, plus speakers and panels on concepts designed to improve Valley life and innovation. As of this writing, the 2017 Silicon Valley Index report may be found online at: http://siliconvalleyindicators.org/

Joint Venture Silicon Valley and its member organizations developed a Housing Toolkit for their Grand Boulevard Initiative, which they hope will improve the length of El Camino Real from San Jose to San Mateo. They and their partners have shown incredible insight when approaching the Valley's housing needs combined with the needs of the organized preservation and historical community and those who need transportation variety. The Housing Toolkit site names goals and funding which support the need for preserving heritage homes and structures, while providing grants and assistance for new, low-cost housing and transportation. A summary of the Grand Boulevard Initiative may be found at: https://jointventure.org/initiatives/grand-boulevard 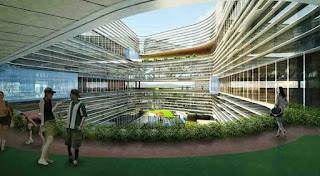 (More futuristic high-tech architecture can be viewed at NPR.org)

Agreement on housing needs in Silicon Valley requires patient, thoughtful collaboration and the welcome residents have always shown to newcomers and new, innovative ideas. Our valley has been immeasurably enriched by past and current residents, by those who have arrived here to work with specialized education and knowledge, and by those who strive here based on their love of family and a desire to provide a better life for their children. Our combined vision is needed to solve the ongoing housing shortage in our region.

The older buildings and homes some work to preserve today, were built by new residents during past eras. Those pioneers were the innovators of their day, just as we are today's innovators and planners, hoping to provide a means for our children (and their children) to live where they work, here in Silicon Valley. 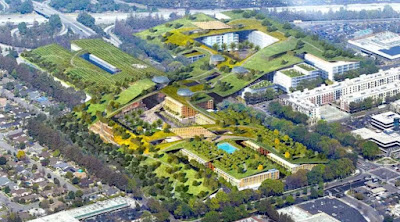